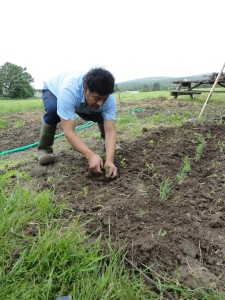 Huertas informally began in 2009. The idea for the project was developed at a volunteer meeting by Charles Simpson.  In 2010, Charles grew and donated vegetable starts that were distributed by people who were on farms teaching English through the Migrant Education Program, which exists through the University of Vermont Extension and the Vermont Department of Education. Soon, the idea began to evolve into a more tangible project with the support of many volunteers including Martha Caswell of Migrant Justice.  Naomi Wolcott-MacCausland, one of the educators at the time, became deeply involved in the program; through talking to farmers, digging plots, planting, and speaking to the migrant workers about the plants they would most like to grow, Huertas emerged. As an unfunded project reliant upon the donation of volunteer time and resources, Huertas has attempted to become more sustainable. Fortunately, the program is growing and many more collaborators and volunteers have joined Huertas to help start plants and promote the mission of the program.

The core mission of Huertas is to support access to homegrown food for migrant workers living in Vermont, a population that faces challenges in food access. When asked about the core mission of the Huertas Project, Naomi stated, “At the end of the day, there are many other benefits, but it is really about supporting people having kitchen gardens and being able to grow what they want to grow” (Wolcott, 2/7/13). The migrant farm worker population in Vermont is comprised of roughly 1200 people (a number that is highly disputed: some suggest there are as many as 3000). The majority of these people have immigrated to the United States from Latin America to work on dairy farms. Additionally, a vast majority of the migrant farm worker population in Vermont is from Mexico, more specifically from Chiapas. 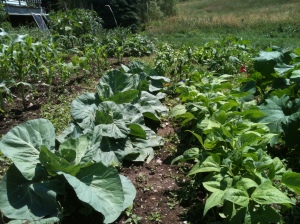 To achieve its core mission, Huertas has found a home at UVM Extension. Through its involvement with UVM, Huertas has some programmatic support through internal funding and last year received a one-time $1000 grant from the Vermont Community Foundation.  Huertas promotes student engagement, as credits can be earned through the program; Jessie Mazar, the previous student coordinator, and Natalie Donnelly, the present coordinator, became involved in Huertas in this way. Additionally, Professor Teresa Mares, through her extensive anthropological work in food systems and food security, is able to contribute her time to the project as a part of her university work. Because Huertas continues to be an unfunded project Huertas relies heavily upon volunteer donations, particularly in the form of time and vegetable seedlings. Some of the many individuals and organizations who have contributed to Huertas include: student and community volunteers, Digger’s Mirth, Friends of Community Gardens, Hudack farm and Claussen’s Florist and Greenhouse. It is through the generosity of both volunteers and local businesses that Huertas is able to drive its many projects.a migrant population, most workers arrive at farms in Vermont due to personal connections, but there is an abundance of movement from farm to farm throughout Vermont and the Northeast. Huertas does not ask the legal status of the migrant farm workers; the mission of Huertas is simply to help migrant farm workers achieve food security by helping them gain access to resources for growing their own food regardless of documentation status. 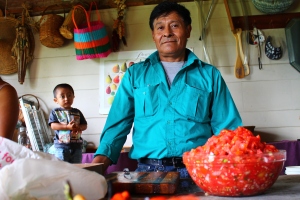 As a small and what Naomi calls a “bare-bones” organization, the Huertas Project is heavily focused on providing as much support as possible to help migrant farm workers become more food secure through planting their own kitchen gardens. The project is constantly seeking donations of plants, tools, and land-space, as well as volunteers to help with prepping, planting, and food preservation.  Additionally, Huertas organizes “community days,” where both volunteers and migrant workers come together to cook Mexican and American dishes with the food they have grown. Such dishes include salsa, jam, and zucchini bread.

With glances towards the future, Naomi simply aspires to make the program stronger. Though it is much easier said than done, those involved with Huertas hope to get to the point where migrants can access resources and plant crops themselves. Through experiences at home, migrant farmers have an abundance of knowledge regarding staple crops and soils but they sometimes lack prior experience in planning and maintaining successful kitchen gardens. Therefore, the goals of Huertas are aimed towards building upon the foundation of knowledge that migrant farmers already possess. In addition, gaining further financial and personnel support remains an important goal for Naomi and other involved with Huertas. With more financial and human capital, the Huertas group also hopes to provide more opportunities for cooking classes, cultural exchanges, and the possibility of expanding into other areas. Another goal for Huertas is to explore how to support access to fresh eggs and chicken meat.  While the organization does not currently have the means necessary to support the construction of low cost portable chicken coops with farmers, they hope to one day be able to provide this amenity. 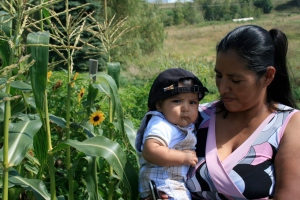 Due to the limited scale of Huertas, Naomi has neither the resources nor the time to devote to research and seems greatly enthusiastic to have us: Kristen, Sam, Hannah and Dan take on a portion of this responsibility. More particularly, Naomi is interested in learning what kinds of gardening programs for migrant farm workers exist in other parts of the country in order to better understand the successes and challenges of different practices and how these practices have helped farmers work more efficiently towards food security. Through our work, we hope to provide Huertas with comprehensive research about nutritional deficiencies, specific knowledge of traditional Mexican food crops, strategies on how to introduce new vegetables and fruits into the gardens, as well as ways to secure additional funding.

Huertas plays an important role in helping establish a better economic, social, environmental and nutritional livelihood for migrant farmworkers in Vermont. Too often are the pains and struggles of those who grow America’s fruits and vegetables hidden from sight. In hiding, they not only receive little attention, but they remain oppressed. Huertas is a key actor in lifting the weight of this oppression and with help, Huertas can be successful.